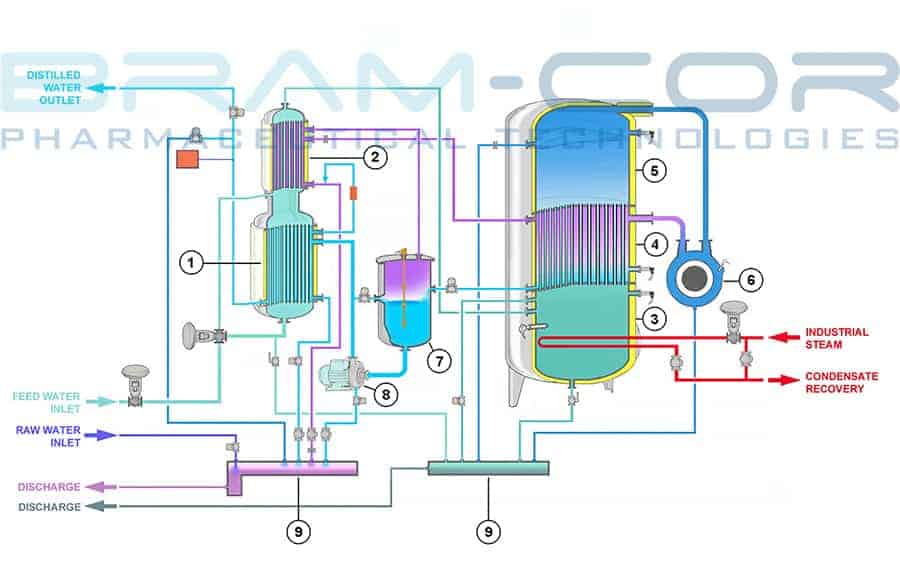 WFI by VCD – How the Vapor Compression Distiller works

As a result, in case there should be any leakage it will be the WFI flowing out to the circuit of the feed water and never the opposite. Therefore, the usual contamination problems that can arise by any multiple effect distiller after some 4-6 years of operation could never happen in case of  BRAM-COR Vapor Compression technology.

The special feature of the Vapor Compression Distiller, allowing to produce WFI at any temperature between 25°C and 99°C,together with the possibility to produce any quantity of WFI desired (from 0 to the maximum capacity of the plant), allows to adapt to any customer need. The same distiller can produce WFI for LVP as for antibiotics (heat sensitive injectables).

This website uses cookies to improve your experience while you navigate through the website. Out of these cookies, the cookies that are categorized as necessary are stored on your browser as they are essential for the working of basic functionalities of the website. We also use third-party cookies that help us analyze and understand how you use this website. These cookies will be stored in your browser only with your consent. You also have the option to opt-out of these cookies. But opting out of some of these cookies may have an effect on your browsing experience.
Necessary Sempre abilitato
Necessary cookies are absolutely essential for the website to function properly. This category only includes cookies that ensures basic functionalities and security features of the website. These cookies do not store any personal information.
Non-necessary
Any cookies that may not be particularly necessary for the website to function and is used specifically to collect user personal data via analytics, ads, other embedded contents are termed as non-necessary cookies. It is mandatory to procure user consent prior to running these cookies on your website.
ACCETTA E SALVA